Next to Ohrid Lake

This city is surrounded by hills on the southern and western side. The lake is in the eastern and northern side of the city. The highway linking to Tirana, Elbasan and Korçë passes through the city. It is located SE of Elbasan, SW of Ohrid in the Republic of Macedonia, N of Korçë and NW of Florina in Greece. The name of the town is Slavic in origin: Pogradec - Po(d) (under/beneath) and Gradec (city in Bulgarian) and means literally "under the city". This is a reference to the former Illyrian settlement, situated on a hill above Pogradec. It was known as İstarova or İstarye during Ottoman rule and was bounded to as kaza center in Görice Sanjak of Manastır Vilayet before Balkan Wars.

The shores of Lake Lychnidus were inhabited in early antiquity. Lychnidus is one of the locations for the Illyrian tribe of the Encheleans that is near Pogradec.The area in the antiquity was at the border between Chaonia and Illyria.

Drilon, the name of the river that flows into the lake near Tushemisht, is mentioned in early texts of antiquity. The hill overlooking Pogradec is the site of old castle ruins dating back to 5th century.

The area of Pogradec is the site of a possible UNESCO World Heritage site.

Pogradec throughout the centuries was occupied by the Romans, Bulgarians, Serbians, Albanians, Ottomans, French, Greeks, Italians, and Germans. The second Albanian language school was started in Pogradec. During the Greco-Italian War in 1940–41, Pogradec and the areas around it were cut in two by the war front. The town was a favorite summer escape for many communist government officials and particularly Enver Hoxha. The summer residences and the area around them used to be sealed off from the public.

All towns around Lake Ohrid gather for Lake Day in a festival where local delicacies including food and culture are showcased. 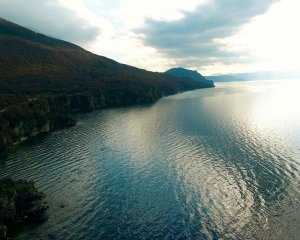